Figure 2 indicates that capture duration is about 10 minutes long. It doesn't give us enough information to determine whether the scan has been prepared (via a script or a tool). Nevertheless, a deeper analysis in the frames enables to withdraw the hypothesis of a manual scan.

Another useful information concerns Protocol Hierarchy Statistics, provided by Tshark. It shows that we have to deal with TCP, UDP and ICMP.

In addition, combining racluster with rasort immediately shows that the majority of the traffic is coming from 10.42.42.253, which (it will be confirmed later) seems to be the attacker's (Mr. X) IP address.

What was the IP address of Mr. X’s scanner?

Based on the distribution of the traffic (see figure 5), it seems that the IP address of Mr X. is 10.42.253.253. This hypothesis is confirmed by the following table, provided by pyScanXtract.py:

For the FIRST port scan that Mr. X conducted, what type of port scan was it?

Note
the scan consisted of thousands of packets. 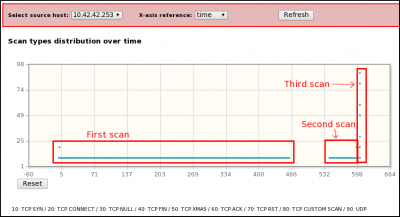 Still with the help of the Web Interface of pyScanXtract.py, we easily answer this question. Indeed, from the Scan distribution characteristics view, with filters on the source host (10.42.42.253) and on X-axis reference (time), we identify three different blocks. By zooming on the graphs and using pyScanXtract frames details, we obtain:

The FIRST scan is a TCP CONNECT() scan.

Examples of scan techniques are given below:

Only SYN TCP flag is activated. This technique is also called "half connection" since it doens't complete the connection (standard 3-ways handshake: SYN - SYN/ACK - ACK). Indeed, only first 2 steps are used. It enables quick scans and raises the probability of not beeing detected by Intrusion Detection Systems (IDS) / Intrusion Prevention Systems (IPS). If the port is OPEN, target answers with a SYN/ACK to our SYN probe, whereas we should receive a RST/ACK if the port is CLOSED.

This type of portscan is USED in the shape of this puzzle.

Again in Figure 8, we see a strange behavior concerning sequence numbers. Indeed, packet on frame #4394 uses the same seq. num. as for frame #4389.

This technique doesn't give indication about OPEN or CLOSED ports, but gives indication about rules implemented on an eventual firewall if any. Indeed, port will be considered as UNFILTERED if a RST is sent as a response to our ACK packet. On the other hand, if the port is FILTERED, we won't get response to our probe, or we will receive an ICMP port unreachable error (type 3, code 1, 2, 3, 9, 10 or 13).

This type of portscan is USED in the shape of this puzzle and shows only UNFILTERED ports.

This type of scan is used in the shape of this puzzle.

This type of scan consists of sending a packet with FIN, PUSH and URG TCP flags. A RST received from target indicates that port is CLOSED. If no response is received, it will indicate that the port is OPEN or FILTERED. And an ICMP type 3, code 1, 2, 3, 9, 10 or 13 will indicate a FILTERED port.

This type of scan is used in the shape of this puzzle.

The presence of a ack num on packet #13600 is really ambiguous since ACK flag is not present (XMAS scan).

Also called "inverse mapping", this technique enables to identify hosts that are up on a network. A packet with only TCP RST flag set is sent to target. In case this latest is up, no response is received. On the contrary, an ICMP host unreachable packet is received if there is no host at tested IP.

Other scans have been found in the pcap file: TCP NULL and custom scans.

A TCP NULL scan consists of sending a packet with no TCP flag set. It sometimes enable to pass through firewalls which rules are based on standard flags settings. Interpretation of results is the same as for TCP XMAS scan.

From the report generated by pyScanXtract.py, it is interesting to notice that we have 2 opposite interpretations (OPEN and CLOSED) for port 135/tcp on host 10.42.42.50. The details of the frames are shown below:

According to the response (RST/ACK), we should deduce that the port is CLOSED. But as we will demonstrate later, 10.42.42.50 is a Windows host, and as stated by Cisco Press (see below), Windows machines don't comply to RFC793 and send RST packet even if the port is OPEN.

This is, of course, assuming that all hosts comply with RFC 793. In reality, Windows hosts do not comply with this RFC. Subsequently, you cannot use a NULL scan against a Windows machine to determine which ports are active. When a Microsoft operating system receives a packet that has no flags set, it sends an RST packet in response, regardless of whether the port is open. With all NULL packets receiving an RST packet in response, you cannot differentiate open and closed ports.
Source: http://www.ciscopress.com/articles/article.asp?p=469623&seqNum=3

Two custom scans have been identified by pyScanXtract.py:

The scan on frame #13590 is like a TCP SYN but with additional ECE and CWR flags set. In this example, we get the same answer as for a TCP SYN (SYN/ACK).

The scan on frame #13603 is like a XMAS scan but with additional SYN flag set.

What were the IP addresses of the targets Mr. X discovered?

Exploiting the results of pyScanXtractpy (see figure 6), we conclude that discovered targets are:

What was the MAC address of the Apple system he found?

From the "Discovered hosts" section of the generated report (pyScanXtract.py), we see following result:

According to the packets from 10.42.42.25 (extraction of ethernet header data), pyScanXtract.py detects that associated physical address is 00:16:cb:92:6e:dc. Exploiting "IEEE OUI and Company_id Assignments" database available at http://standards.ieee.org/regauth/oui/oui.txt, it is possible to obtain the name of the vendor: Apple Computer.

We could have used passive OS fingerprinting with p0f to validate our hypothesis but as Figure 15 shows, our host is not recognized (UNKNOWN).

What was the IP address of the Windows system he found?

"Microsoft's DCOM (Distributed, i.e. networked, COM) Service Control Manager (also known as the RPC Endpoint Mapper) uses this port in a manner similar to SUN's UNIX use of port 111. The SCM server running on the user's computer opens port 135 and listens for incoming requests from clients wishing to locate the ports where DCOM services can be found on that machine."

"TCP NetBIOS connections are made over this port, usually with Windows machines but also with any other system running Samba (SMB). These TCP connections form 'NetBIOS sessions' to support connection oriented file sharing activities."

On question 2, we have explained that Windows machine don't comply with RFC 793 in case of a NULL SCAN. The fact that another scan presumes that port 135/tcp is OPEN seems to confirm our presumption about the Windows machine.

As we can see from pyScan Web Interface against host 10.42.42.50, IP-ID numbers are growing regularly, which is typical from Windows systems.

IP stacks give us clues to passively fingerprint the OS. Honeynet has published a database (http://old.honeynet.org/papers/finger/traces.txt), enabling to determine OS, based on certain criteria (ttl, window, tos, ...). Using this database, we see that most (all?) of the packets originating from 10.42.42.50 have following characteristics:

Although this information is not very reliable, it is an additional indication that could confirm the host is a Windows machine.

These 4 indications seem to confirm our presumption: Windows machine has IP 10.42.42.50.

What TCP ports were open on the Windows system?

Note
Please list the decimal numbers from lowest to highest. 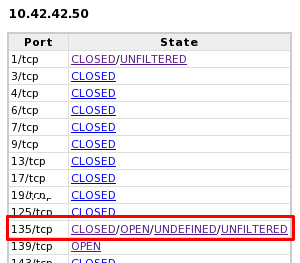 Note
(You don’t have to answer this, but you get super bonus points if you do): What was the name of the tool Mr. X used to port scan? How can you tell? Can you reconstruct the output from the tool, roughly the way Mr. X would have seen it?

It exists many port scanners, for all operating systems. Here is a list of some of them:

We can see common scan techniques :

I haven't tested all port scanners to check if I could find similar signatures, but with all these information, here are our assessments:

The hypothesis of Queso seems to be discarded.

It seems that the Nmap could be a possibility.

It is stated in the documentation that:

As it's been noted, the number of datagrams we need to send and receive in order to remotely fingerprint a targeted machine with ICMP based probes is small. Very small. In fact we can send one datagram and receive one reply and this will help us identify up to eight different operating systems (or classes of operating systems). The maximum datagrams which our tool will use at the current stage of development, is four. This is the same number of replies we will need to analyse. This makes ICMP based fingerprinting very time-efficient.
Source: X-Probe official documentation

It doesn't fit with the large amount of packets sent in the pcap file.

The hypothesis of XProbe seems to be discarded.

This hypothesis seems to be discarded.

As a conclusion, I think the most probable hypothesis is Nmap. Indeed, this port scanner is a very (the most?) complete port scanner that offers the possibility of controlling almost all parameters of the scan. In addition, typical signatures (scan types, fixed sport, distribution of TTL, ...) have been found thanks to pyScanXtract Web Interface.

This puzzle was really my favorite! It was really exciting to make the necessary reverse-engineering to reproduce the output Mr.X. has seen. It really requires strong knowledge on TCP/IP to make it and understand the exceptions.

I had the idea of initially developing only a Python script (my favorite language ;-), but found appropriate to use the data I had in the database to display other useful information and draw graphs. I am certain that pyScanXtract is a useful tool that I will use for future uses. That's why I have published it on Google Code (http://pyscanxtract.googlecode.com/files/pyscan.tar.gz) and identified some improvements I have reported in the README file.

At least, I really found interesting to analyse distribution graphs, and I promised myself to write a paper on it. I will let you review it when it will be done, and will prepare an exercise for you guys :-P